The Bass Reeves Legacy Initiative is an organization dedicated to preserving and enhancing the story of U.S. Deputy Marshal Bass Reeves.

The group’s first task is a monument honoring Bass Reeves. The sculpture is by noted Oklahoma artist Harold Holden. The project will cost approximately $300,000.

A couple of weeks ago, some members of the Bass Reeves Legacy Initiative traveled to Mr. Holden’s studio and previewed the clay model. 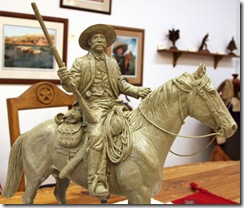 Ray Gosack is the man behind the camera in all of these photos.