Here are details on visitation, services, and burial for Bill this week. You can sign the guest book and read tributes, too.

I found a couple of pictures of Bill.

Here’s one from about 3 or 4 years ago when we took the Manufacturing Executives Association on a tour of the dam project. Wendy thinks he’s getting ready to throw that rock at me and my camera. 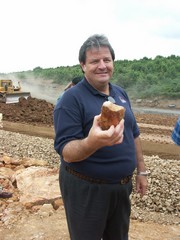 This one, from around August 2005 is technically challenged. The pilots in the 2 F-16s are Col. Kevin Wear and Col. Tom Anderson. We’d won the BRAC War, and Kevin was making his first flight in several weeks. Tom took him up for a recertification mission. They invited Bill and me out to the base to watch. We sat in on the pre-flight briefing, “stepped” with the pilots out to the ramp, and then rode out to the end of the runway and watched the crews perform final pre-flight checks. Tom was first off the ramp. He lit it up cherry red on takeoff. Kevin was more conservative. We razzed him for such a “wimpy” take-off.

Bill, Tom, and Kevin developed a strong trust for one another — in a very short amount of time. This coming Wednesday will mark two years since our adventuresome trip to and from San Antonio for the BRAC hearings, and an aerial race to beat BRAC Chairman Anthony Principi to Fort Smith for his site visit to the 188th. We turned a corner during a July 5 meeting with staff in DC, and during the July 11 hearing, we took off toward victory. The impossible was becoming very, very “doable.” 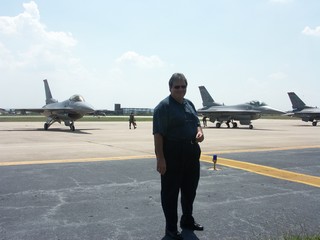 JW at Bedford Camera & Video is working on lightening Bill up a bit. Jeff Beauchamp is such a friend to Fort Smith, and to me. He called early this morning, offering to provide memorial photos for the services, or whatever we needed.

We’re thinking we’ll do 3 enlargements each of these two photos — one for each daughter.